The way I see it is that good friends support each other after something bad has happened, great friends act as if nothing has happened. — Gabrielle from Desperate Housewives

I am so happy I could do the happy dance and did! My wisteria is FINALLY blooming after 10 years. I bought it when my mother passed away and planted it. It has been vexing me since! I’ve read it doesn’t bloom for up to 8 years. But I determined I WOULD FORCE IT to bloom this year. The hubby helped me trim all the lonnnnnnnnnggggggg suckers off the top, I gave it a root pruning and some fertilizer and voila! beautiful blooms – YAY!!!!

My body is just aching all over from the 8 hours of gardening I did yesterday. But I am determined to have the best garden I’ve ever had this year. I’m taming those little soldiers into place and actually planning on stopping by the horse farm to pick up poop. I’m just so happy I could poop or do the happy dance…I think that’s preferable!!! AND gardening does  make you lose weight. Seven pounds now – HAPPY DANCE!

I thought a nice tribute to Mom was to put some forget-me-nots on the spot where I have her ashes in front of the little angel ornament with the broken wing.

My sister has been planting new plants and is so proud of her foxglove. I mentioned that it’s highly poisonous and that she might want to wear gloves while doing all that foxglove planting.

I guess THIS housewife was desperate?

A suburban Denver woman has pleaded guilty to reduced charges after authorities say she tried to poison her sheriff’s deputy husband by spiking his salad with a lethal plant.

Forty-two-year-old Lisa Leigh Allen was accused of trying to poison her husband, a Jefferson County sheriff’s deputy, with the decorative garden plant foxglove.

The man was hospitalized in the summer of 2008 after eating a spaghetti dinner and bitter-tasting salad served by his wife.

Tests showed he’d eaten foxglove, which can be fatal if consumed. Lisa Allen was charged with attempted murder. She pleaded guilty to felony assault, KMGH-TV in Denver reported Tuesday.

Sentencing is scheduled for May 14. 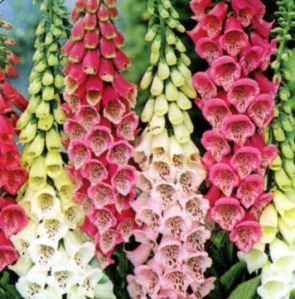 LESSON FOR THE DAY: WISTERIA, FOXGLOVE AND FORGET-ME-NOTS ARE NOT EDIBLE!!!!

Laugh, learn and liven up your taste buds! (but not with foxglove dearies)

6 Responses to “Desperate Housewife – I’m so happy I could Poop!”