Filed under: Interesting — celebrationgoddess @ 8:53 am 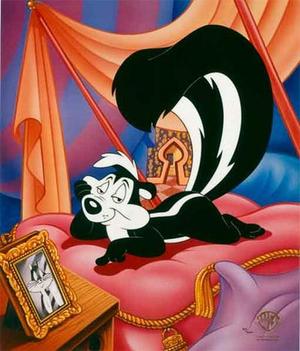 Pepe Le Pew is 66 today and still has his jenna sequa!!! Mwah!

A French skunk that always strolls around in Paris in the springtime, when everyone’s thoughts are of “love”, Pepé is constantly seeking “l’amour” of his own. However, he has one huge turnoff to any prospective mates: his malodorous scent. Furthermore, he cannot take ‘no’ for an answer, blissfully convinced that the girl is flirting with him, even when she physically assaults him. Pepé is stereotypically French in the way Speedy Gonzales is stereotypically Mexican. So let’s wish Pepe joyeux anniversaire and celebrate by eating some stinky cheese!!!

Taleggio: It’s not the prettiest cheese to look at but, unlike most stinky cheeses, Taleggio really doesn’t smell so bad. Appreciated for its strong taste and soft texture, this Italian cheese is becoming more and more popular on a national level and it’s even getting ready to make its debut on foreign markets.

Pont l’Eveque: This smelly French delicacy is one of the oldest known types of cheese, dating back to the 13th century. To be honest, it smells like it’s that old too. This isvthe kind of food you want to keep wrapped-up in the fridge, unless you want everything else smelling like it.

Blue Stilton: It has been called the king of English cheeses on more than one occasion and if you subscribe to “the smellier the better” school, you’ll definitely want to try it. The texture of this British cheese varies from hard and crumbly to very soft, almost butter-like, depending on how mature it is. The older the cheese the softer and smellier it is.

Stinking Bishop: One of the oldest types of cheese in the world, Stinking Bishop dates back to the time of the Cictercian monks. It’s produced out of pasteurized Gloucestershire-cow’s milk and then washed with Stinking Bishop Pear juice, which makes the rind orange and really sticky.

Camembert: Despite smelling like “God’s feet”, Camembert is France’s favorite cheese and the bestseller after Emmental. It is now a subject of a war between the small traditional producers and the country’s industrial dairies who want to use pasteurized milk instead of raw.

Limburger: Mainly produced in Germany, Limburger is perhaps the most popular of all smelly cheeses. It is fermented using Brevibacterium linens, a bacterium partly responsible for the smell of the human body. As a result, when people say limburger smells like human feet they are scientifically correct.

Brie de Meaux: Just for the record, this is not the kind of pasteurized-milk Brie that you can find on the American market. We’re talking about the original, raw cow’s milk Brie that the French love so much. It’s a very creamy cheese, covered by a thick, white mold crust which true cheese-connoisseurs say should be eaten, not thrown away.

Munster: This French cheese is often called “Monster Cheese” due to its unbearable odor. It comes from the French region of Alsace where it’s produced from raw cow’s milk and left to mature in damp cellars. Its rind is washed regularly with salted water.

Epoisses: One of Napoleon’s favorites, Epoisses is definitely one of the smelliest cheeses you can find. Just so you get an idea of its repulsive odor, you should know that Epoisses has been banned from public transportation vehicles all over France. It is made from raw cow’s milk and its rind is washed with pomace brandy.