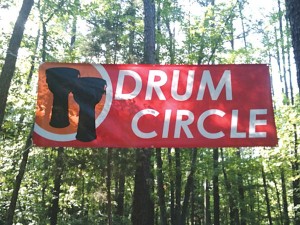 SO MUCH FUN SATURDAY –
(the greatest day of the week!)

What might a goddess like me be doing on a wintery evening such as this? Well drumming, of course! I met a very nice couple named Fiona and Jeff. Fiona hails from merry ole England and is she an interesting person!

Each month they host a group of people who join together, drink wine, eat a pot luck (I’m bringing Asiago cheese and spinach rice) and DRUM!!!! BOOM BOOM BOOMMMM!!! Last time I joined the little group we were about about 10 and this time we’re on tap for 25! Being a goddess who likes to belly dance once in a while, Fiona offered up her hip scarf and I was able to shimmy those chocolate chip cookies away!

What exactly is a drum circle you ask?

A drum circle is any group of people playing  drums in a circle – duh! They are distinct from a drumming group or troupe in that the drum circle is an end in itself rather than preparation for a performance. They can range in size from a handful of players to circles with thousands of participants. There is no music to read. One only bangs away with the rhythym of the rest of the player for an extended period of time. Typically one person starts a rhthym. The song varies in timing and loudness. And it can be soothing or invigorating!!!

In 1991, during testimony before the US committee on Aging, drummer Micky Hart state:

Typically, people gather to drum in drum “circles” with others from the surrounding community. The drum circle offers equality because there is no head or tail. It includes people of all ages. The main objective is to share rhythm and get in tune with each other and themselves. To form a group consciousness. To entrain and resonate. By entrainment, I mean that a new voice, a collective voice, emerges from the group as they drum together.

And through the drum
I become
The flame

Moving, flickering,
Originating from within
This is absolute creation of original thought

And I, it, we, are moving
As One
Expressing, Exhilarating, Unifying

I am the drum

Enjoy your Saturday night – and maybe bang on a drum…