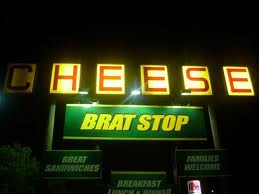 SO MUCH FUN SATURDAY – (the greatest day of the week!)

The Brat Stop opened in 1961, and is located just five minutes over the Wisconsin/Illinois border. I-94 & HWY 50, Exit 344.  It has been fondly called 1 acre under a roof without a car for sale.  Keeping pace with the times has been a big factor in the Brat Stop’s success. It has grown from 1,200 to 46,000 square feet.  With the help of our staff we get to play ambassador to over 450,000 visitors per year at this unofficial “Gateway to Wisconsin”.

What’s the allure?  Well, anyone who travels knows that sampling regional cuisine is half the adventure, and a visit to Wisconsin simply isn’t complete without sampling a bratwurst.  The beer and brat are inextricable parts of the German settlers that made roots here in the 19th century.  The word Bratwurst is of German origin; brat means fry, wurst means sausage.  A bona fide Wisconsin cook-out or tailgate always offers lots of tasty beer soaked grilled brats.

Cheese is another regional specialty and the varieties of cheese available in the Badger State makes visitors heads spin.  The Brat Stop’s Cheese Mart and Gift Shop lets visitors take home brats, cheese and light-hearted Wisconsin related memorabilia. Most visitors bring home a few “cheesy” souvenirs, one of the more popular being a foam cheese head hat that looks like a wedge of cheese.

Since opening in 1961, many sports, political and entertainment personalities have eaten at The Brat Stop whose mystique has been irresistible to Micheal Jordan, Phil Jackson, Tony Kukoc, Al McGuire, Tom Arnold, Steven Tyler, Willard Scott, Bette Midler, Shelly Fairchild, Tommy Thompson, Russ Feingold…..  “The Best Damn Sports Show” even filmed here once.  Many of these stars undoubtedly stayed a little later than planned just so they could sample another Wisconsin institution- The Friday Night Fish Fry.

Laugh, learn and liven up your taste buds!
Bethsheba
http://imacelebrationgoddess.com/index.html