Filed under: Breakfast grumblings — celebrationgoddess @ 7:47 am 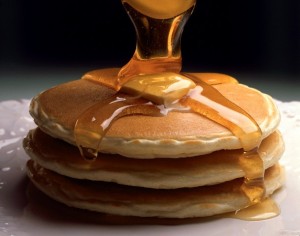 FOODIE FRIDAY – (enjoy a new recipe to try this weekend!)

Pancake Week is grounded in ancient tradition. During the Middle Ages, it was common practice to prepare for the austerity of Lent by purging the pantry of luxurious foods such as eggs, butter and milk. These ingredients often became big batches of pancakes. To this day, many communities around the world feast on pancakes all the way through Shrove Tuesday–also known as Fat Tuesday or Mardi Gras–before the season of moderation begins on Ash Wednesday. In fact, another name for Fat Tuesday is Pancake Day.

Despite its no-nonsense name, Pancake Week inspires its share of eccentric behavior.

Whatever you may call them–battercakes, blini, blintzes, crepes, flapjacks, griddlecakes, hotcakes, johnnycakes or pancakes–they stack up to a plateful of good eating. Experiment with thick batters and thin, make them sweet or savory, and try out all sorts of toppings and stuffings. Have a great time indulging in pancakes this week!