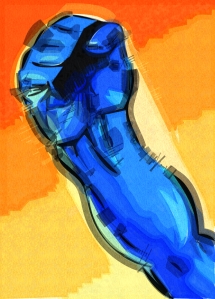 Author John Kralik on a Year of Daily Acts of Gratitude from ABC website:

When author John Kralik’s life hit a desperate low, he decided on New Years Day that if he could focus on what he had instead of what he didn’t have, that perhaps his life would become at least tolerable.

In 365 Thank Yous, Kralik chronicles the following year of his life, in which he wrote a thank you note every day to anyone and everyone he could think of. Read an excerpt of 365 Thank Yous below.

A Walk in the Mountains

Before she broke up with me, Grace and I had planned to spend New Year’s Day walking on the Echo Mountain trail that leads into Angeles National Forest above Pasadena. When the day came, I called her to see if she might still want to come. She had other plans. I would be starting the new year alone.

I decided to walk into the mountains anyway.

I took the three-mile hike above Pasadena on the Echo Mountain trail, which ends at the crumbled remains of an old hotel. Hot winds and constant mountain fires had burned down that hotel, again and again, and eventually, about seventy years ago, the owners had stopped rebuilding. Guests had reached the hotel by train on the Mount Lowe Railway, which was now defunct and had also since succumbed to the elements. Only corrupt and scattered remains of the track can be found. But spectacular views of the Los Angeles Basin stretch out below the crumbled stone bricks of the hotel’s remains. On a clear day you can see all the way to the ocean.

On this semi-clear day, when I got to the old hotel site, I joined a host of New Year’s early risers. (The AA crowd, I thought.) They were looking through binoculars, hoping to spy the Tournament of Roses Parade winding through the foggy streets of Pasadena below.

I could feel the distant rumblings of the parade, but I was in no mood for it, so I turned to walk deeper into the mountains. Eventually, the sounds of trombones and French horns faded. Longing to be completely alone, I meandered the back paths, pushing on until I was all by myself. Then I took a wrong turn, lost the path, and became completely lost. I had no company that day but the inner voice that kept saying “loser.” There was no one I wanted to ask on that walk who wanted to come with me. My desires and faults had left me solitary at middle age.

But this year not only was I a loser at what I was doing, I also didn’t want to do it anymore. I wanted to do something more meaningful with my life. I wanted to be more than just another lawyer slinging hatred for a living.

I had always wanted to write, I remembered. But thirty years ago, I had become a lawyer. Soon, I’d had a family to support; eventually, I had two families and a firm to support. There had never been time to write. A few months before my first child was born, I had packed up my writing neatly in files and put it away in a box. The box had fallen apart many times, but I had always replaced it. I had carried it from divorce to remarriage to divorce, from house to apartment to cheaper and cheaper apartments.

Now time was running out. I was older than the idol of my college years, Jack Kerouac, had been when he drank himself to death. I was just a bit younger than Hemingway had been when his muse so dimmed that he saw no point in living. As I struggled through the brush in search of a new path, I ran through ideas I’d had for writing projects over the years. This year, I thought, I should try to write something, and I should actually finish it. Yet even as this thought made its way through my mind, I knew how futile a thought it was. I had no time, no energy.

The mountains in this area are not so complicated, and despite the drama in my head, a return to civilization was still available to an inexperienced hiker. Heading generally downward, I eventually found another trail, and made my way, slipping and sliding, to the old hotel. Sitting on the remnants of its concrete slab, I stared out at the vast, quiet expanse of Los Angeles. This is a perspective from which the most sordid distress of humanity can seem peaceful.

For some reason, at that moment I thought of my grandfather John Kralik Jr., a veteran of the First World War and a successful dealer in insurance, real estate, and the stock market. Perhaps he came to mind because when he was my age, my grandfather had already retired. When I knew him, he played golf and watched it on television. In the morning, he sat at his desk and checked stock prices. Perhaps I was dwelling on my own bitterness at the certainty that I would not be playing golf or checking stock prices anytime soon. I would be working for a long time, I thought, perhaps till the moment of death.

When I was about five, my grandfather gave me a silver dollar. My grandfather had twelve grandchildren at the time. Eventually he would have twenty-four, and he would often try to impress us. It was about 1960, and if you really wanted to wow a child in those days, you gave him or her a silver dollar. It seemed an impossibly large sum of money in a shiny, mysterious package. I didn’t know how to spend it, and don’t believe I ever did. Silver dollars doled out by my grandfather and other relatives in those days were confiscated by my parents, who did not trust us with them. Eventually, my mother put them in a bank account, and I believe they are still there today. Though the money would have made no difference to me, I should have paid more attention to the message that my grandfather delivered with it. He promised that if I wrote him a letter thanking him for this silver dollar, he would send me another one. That was the way thank-you letters worked, he told me.

I have only a few memories of my grandfather from this period of my childhood, but I remember well that on this occasion he was true to his word, and soon I had two silver dollars. Having experienced the truth of this principle, however, I failed to learn it. I never sent a second thank-you note for the second silver dollar. For some reason, I left it at that. It may be that I didn’t need or want another silver dollar. After all, my mother would put it in the bank, and I would never see it. But I was blind to the real lesson he was trying to teach me. So I did not receive a third silver dollar.

A couple years before that walk in the mountains, as part of my pipe dream of a gentle, gallant law practice, I had fancied that I would be handwriting a lot of personal notes. My office manager had dutifully ordered some very nice personal stationery, several hundred notes and envelopes in a gentlemanly off-white. Soon we would be kicked out of our offices, and the return address on hundreds of unused envelopes would become obsolete.

Sitting on the concrete slab that is all that remains of the hotel at Echo Mountain, I listened to the voice, and then the following thoughts, first of my grandfather and his silver dollars, and then of the nearly useless envelopes. And I came up with an idea.

I would try to find one person to thank each day. One person to whom I would write a thank-you note. By the end of the year, I would have used up the stationery. I would have written 365 thank yous.

I stood and began to walk down the mountain trail toward home. I had been in the mountains the entire day; I had walked nearly fifteen miles. I was exhausted and still had little hope, but I had figured out how I might go on. My only problem: Did I have anything to be grateful for? The way my life was going, I hardly thought so.

I saw the writer on the news and thought what a wonderful thing to do. So Thank you if
I haven’t told  you lately. I Thank You so much for your friendship!