FOODIE FRIDAY – (enjoy a new recipe to try this weekend!)

Okay when is the last time you’ve made balls? Got out your the butter, lathered up your hands and squished together some sweet delicious balls?

According to legend, popcorn balls were originated when an unusually heavy rain in Nebraska washed the sugar out of sugar cane, high heat cooked it into syrup and popped the corn right off the ears in a huge field. The two combined and the popcorn ball was born. Somehow, I find this tale to be less than believable. It is much easier for me to believe that someone, having combined a salty-sweet syrup and/or caramel with popcorn, realized that it would be much easier to sell and package when shaped into balls. Though they started selling them at fairs, the popcorn balls make popular holiday treats, 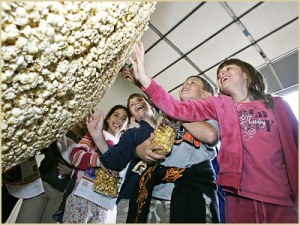