Filed under: Dance like no one is watching — celebrationgoddess @ 10:17 pm 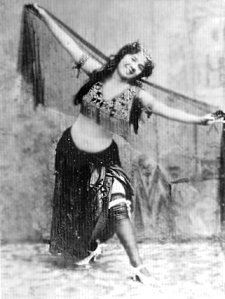 The French called it La Danse du Ventre, and the Arabs called it Beledi. When it was introduced in United States,by a dancer named “Little Egypt” at the Chicago World’s Fair in 1893, it was called Belly Dance.

Its focus on the movements of the hips and the abdomen make it a uniquely women’s dance, although in some times and places men have danced as well. Caricatured by western popular culture, frowned upon or banned by religious extremists everywhere, and generally misunderstood, the dance touches that sensitive intersection between our spiritual and physical human selves.

Belly dancing is a beautiful, powerful, expressive art form with deep roots in a rich and ancient history as old as civilization itself. In spite of censure and the passage of time, it is as vibrantly alive and vital today as ever.

The 3 things I’m happy about today are:

Going to belly dance for the first time in about 3 years. Yes my belly button is pretty darned rusty.

Having a co-worker request my help because of his confidence in me.

Laugh, learn and liven up your taste buds!
Bethsheba

One Response to “Got a belly – well shake it!”